WTI falls below $99/b on Yemen truce and SPR releases The price of the U.S.-based WTI crude oil contract fell below $99/b and Brent crude below $104/b on Monday morning as investors weigh the news of a truce in Yemen for the first time in seven years coupled with the coordinated release of oil supplies from SPR- strategic crude oil reserves from main countries such as U.S, Japan, and the UK. 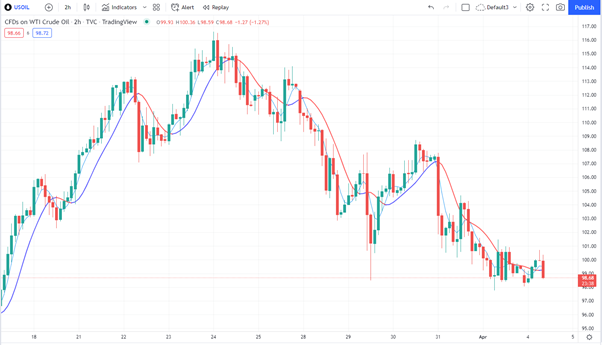 Both Brent and WTI crude prices have lost more than 25% since hitting a 14-year high of $140/b and $130/b respectively at the beginning of March, as energy investors factored the worst-case scenario by losing all 11 million bpd Russian crude export after Russia invaded Ukraine at a time that global inventories were at record low levels, while OPEC group was hesitating to ramp-up production.

A geopolitical risk premium was removed from the crude oil prices this morning after the Iran-backed Yemen Houthi group and the United Arab Emirates welcomed a U.N.-brokered truce in Yemen.

According to the UN, the 2-month truce will allow the fuel imports into Houthi-held areas and some flights to operate from Sanaa airport.

The ceasefire would halt the military conflict between Houthis rebels and the Saudi Arabia-UAE coalition within Yemen’s borders for the first time since the start of the war 7 years ago.

This is a bearish event for oil prices since it is easing (temporarily) the threats to energy supplies in the oil-rich Middle East, especially after the recent Houthi drone attacks on Saudi Aramco’s oil facilities near Yemen borders.

The war was also an ongoing threat to energy supplies from the Bab-el-Mandeb strait, which it’s a strategic maritime link between the Indian Ocean and the Mediterranean Sea via the Red Sea and the Suez Canal, transporting more than 3,5 million bpd of oil by tankers.

Crude oil prices lost more than 12% last week, their biggest weekly losses since 2020, when U.S. President Joe Biden announced the release of 1 million bpd of crude oil for six months from May on Thursday, which at 180 million barrels is the largest release ever from the U.S. Strategic Petroleum Reserve (SPR).

At the same time, more countries, and organisations such as the UK, Japan, and IEA- International Energy Agency have pledged to release crude oil from their SPR as well, in a coordinated effort to provide an increased amount of supply in the already tight global energy market and balance off any Russian disruptions, and eventually to cool off the record-high oil and gas prices.