Tech-heavy Nasdaq dips ahead of U.S. inflation data for March The growth-sensitive growth tech stocks of the Nasdaq Composite have hit hard in the recent days since the surging bond yields, the soaring inflation, the aggressive hawkish monetary stance from Federal Reserve, and the ongoing Ukraine conflict increase the recessionary fears and weigh on their valuation and earnings outlook.

The tech-heavy Nasdaq Composite lost more than 2% to 13,411 points on Monday, and it has been down by more than 18% since the start of 2022, as investors continued moving away from the high multiple growth stocks on worries that the Federal Reserve’s plans to aggressively tighten monetary policy, disruptions in global supply chains due to Ukraine war and Covid-led China lockdowns, and soaring inflation could slow economic growth. 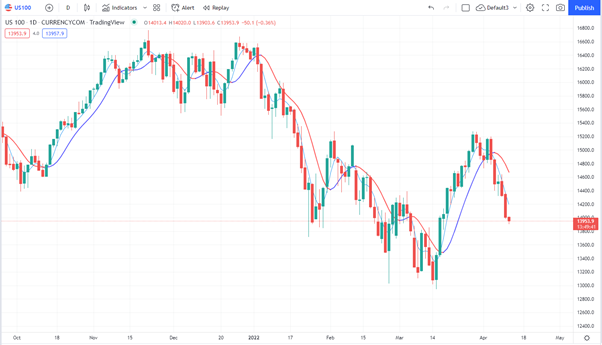 Economists worry that the global economy will grow to an around 3% rate vs 4% previously expected at the beginning of the year, despite the efforts by central banks to fight inflation and tight their monetary policies without causing major damage to the economies.

Technology stocks have seen their valuations exploding during the Covid era, getting support from the low-interest rates and the massive liquidity in the market following the accommodative monetary policy by Federal Reserve to help the economic recovery after the pandemic.

Ahead of the CPI-Consumer Price Index: Dollar and yields rally:

Investors are looking ahead to the well-awaited U.S. Consumer Price Index for March later today which could provide more indications on the outlook for Federal Reserve monetary policy.

Economists polled by Dow Jones expect the U.S. inflation data to show an 8.4% annual increase in prices, the highest since December 1981, which will be much higher than the 7,9% inflation rate reached in February.

The market believes that if the report shows a higher-than-expected inflation data for March then most probably the Federal Reserve could proceed with a more aggressive monetary policy by hiking the Funds rates by 50 basis points at both the May and June FOMC meetings to curb inflation in the country.

As a result, the DXY index which measures the U.S. dollar against six major currencies broke above the key resistance level of 100 level, posting a fresh two-year high, while the 10-year U.S. bond yields exceeded the 2,80% mark yesterday for the first time since January 2019.

Both greenback and bond yields have risen recently on growing concerns that the hawkish Fed’s monetary stance and surging inflation could hurt the economic growth.