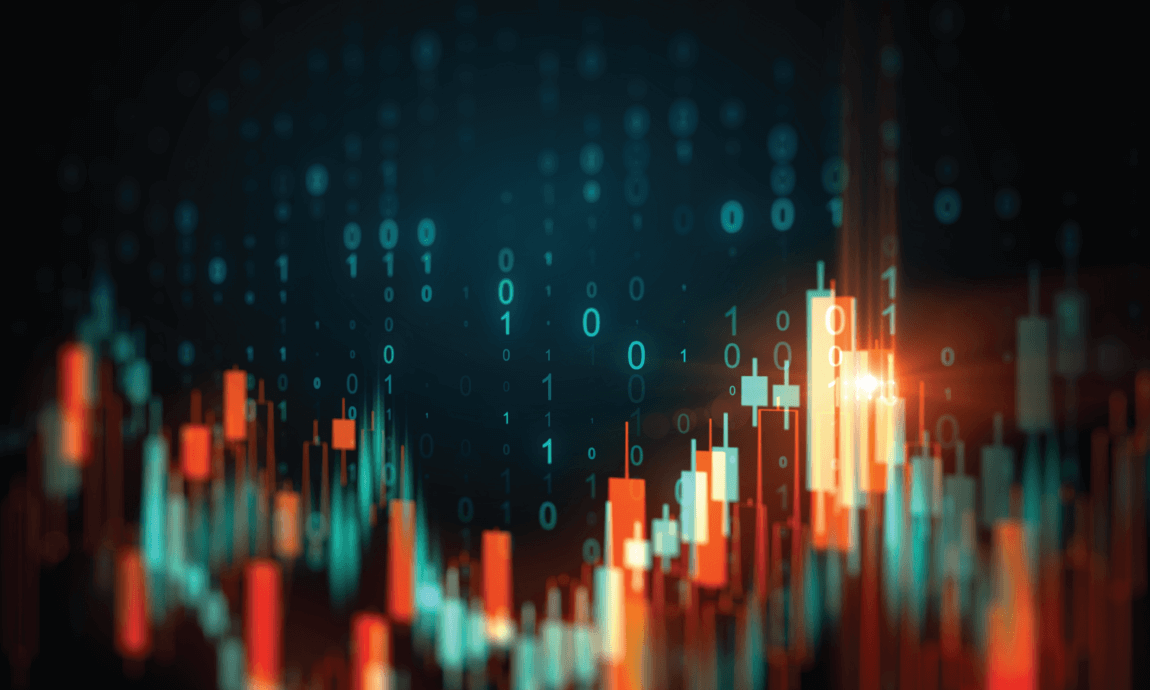 As we ended 2021, the talk of the town was inflation. While Central Banks, especially in the US, think inflation will eventually come down, the new language in “Fed-speak” does not encompass the term “transitory” anymore. The Fed is now a headwind for markets.

I must admit that I never prescribed to the narrative that growth stocks can expand their multiple to infinity just because we were in a low inflationary environment. In fact, many of the high-flying names over the past 2 years have given up most of their gains and in many cases are below where they were pre-covid. The ARK family of ETFs is just a small example, where the ARKK ETF is down by 25% for the year. Is the growth-stock model busted?

On the other hand, we have the mega-cap names that have not given up anything and are the primary the reason for the record highs at the Index level. Five companies alone (Apple, Microsoft, Alphabet, Amazon, and Facebook) are responsible for about 30% of the gains of the S&P 500 and nearly 50% for the Nasdaq 100. Is there a risk of high concentration, and might a different strategy be needed in 2022?

I think we can mostly agree that the biggest driver of market returns over the past 2 years has been Fed policy. If we agree on that, it also means a reverse of Fed policy might be the reason for a market correction.

If the Fed does what the consensus believes, it is possible the US economy will enter recession. But even if we don’t get a recession, a slowdown of economic activity is most likely. Insofar as the market is concerned, it will probably react the same in both cases. In other words, the perception that the economy will weaken will probably be bad for equities even in the absence of a recession. Second, for the Fed to tighten as many believe, everything must go according to plan over the next 2-3 years including the absence of an exogenous event like COVID.

But the problem with higher US rates is not only the effect it might have on the US economy, but the effect on other currencies and other economies. While Turkey’s currency problems mostly have to do with politics, the same does not apply to other emerging markets.

Usually, the value of the dollar has nothing to do with traditional metrics by which other currencies are valued. This is why the US twin deficits (trade and current account) have never really affected its value. Also note that when the dollar is rising it usually means risk-off, and vice-versa when it weakens.

When the dollar goes up or down it is usually a function of the availability of dollars in the global economy. Because about 80% of global trade is conducted in dollars, a lack of dollars usually bids up its value, and an abundance of dollars the opposite. The point being is that the dollar does not adhere to the normal metrics used in other currencies.

So, it might be the Fed has been tightening without realizing it. But even if it realizes it, paying 5 basis points of interest for reverse repos rather than having negative money market rates, might be the better of two evils.

While in theory repo operations have nothing to do with FX flows, and thus should not impact the value of the dollar, at the same time the fact that this dollar liquidity is trapped at the Fed might be a reason for dollar strength.

In any case, we will be following this facility in 2022 to see if our theories have any credence, and to see if we notice any change in the dollar (especially vs the EURUSD pair) as a result of the increase or decrease of this facility.

Now insofar as fighting inflation, the Fed must persuade markets and politicians that it knows what it is doing. The Fed can easily bring down inflation simply by crashing the economy with higher rates. The question is, is this the best policy? Is a recession worth bringing down inflation?

Personally, I doubt this is what the Fed wants. After all, why crash the economy only to lower interest rates again and increase asset purchases from the beginning? The Fed has a very difficult job ahead of it because markets are very sensitive to higher rates and conditioned to Central Bank liquidity.

Please recall that just 4 small hikes in 2018 were enough to crash markets and bring the US economy to a mini recession. This even before COVID. Today things are probably much worse, not to mention the fact that markets are conditioned to Central Bank liquidity and zero rates. Remember, we did not have monetary expansion in 2018, the Fed was shrinking its balance sheet, and rates were not at zero.

So, there is no playbook that the Fed can go by. This is why the current monetary situation is so difficult to navigate and prone to mistakes. Because if markets think they will not have Central Bank support, then there is the possibility of a sever correction that will most likely have a toll on the economy. Therefore, the Fed is skidding on thin ice; it’s a “dam if you do, dam if you don’t” type of situation.

My playbook of what the Fed might do is as follows. The Fed will continue to try to convince markets that it will tighten conditions to combat inflation, and it might raise rates 2-3 times, but no more than that. I honestly do not believe it will tighten conditions much more out of fear of what that might do to markets and the real economy. This despite having negative real rates for the foreseeable future. Between a recession and negative real rates, negative rates are the lesser of the two evils.

The risk of Extreme concentration in mega cap stocks

The question I have been asking myself over the past 12 months is what might happen if we see an exodos from mega cap stocks? Will money flow over to unloved sectors and deeply undervalued stocks, or will everything fall irrespective of the valuation of each individual name?

The risk, therefore, in 2022, is that we might see these mega-cap names being sold and bringing down the market at the index level. This is a real possibility, because it’s always the biggest and highest conviction stocks that fall last. While I am not making a call that the mega caps will correct in 2022, it is something to keep an eye on. 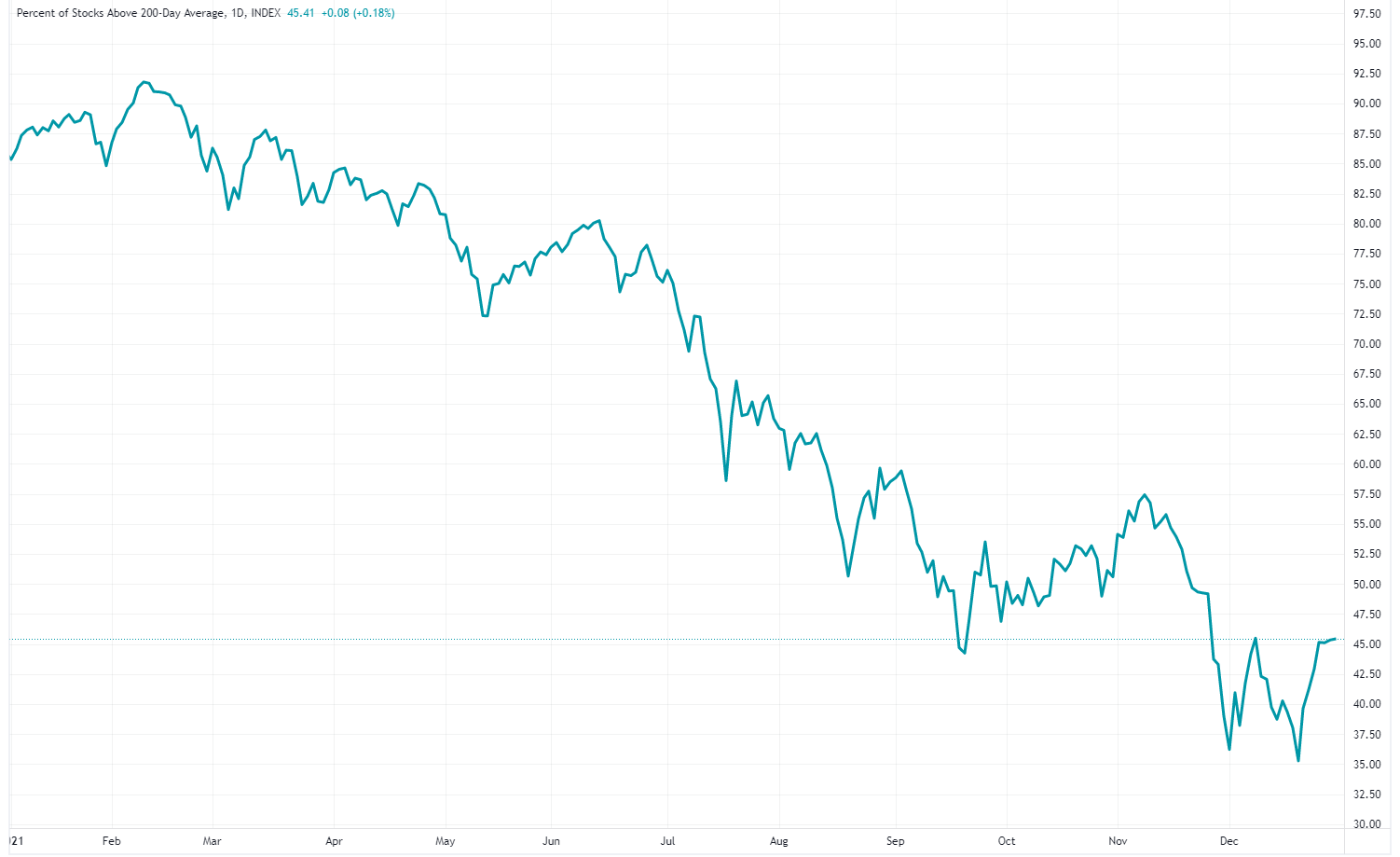 The above chart depicts the breath indicator for all stocks in the US above their 200-day moving average. As you can see, while the main indexes were going from record to record, breath indicators ,strong>were deteriorating the entire year. In fact, towards the end of the year in December, only about 1 out of 3 stocks were above their 200-day average. This is not indicative of a rising market.

It does not matter which breath indicator you look at; the common denominator is that most stocks in the US have been deteriorating all year while the main indexes were at new highs. Another example of how strange things have been this year can be found in a recent article in Blomberg (link here).

“Last week, when the S&P 500 closed at a 52-week high, 334 companies trading on the New York Stock Exchange hit a 52-week low, more than double the amount that marked new one-year highs. That’s happened only three other times in history -- all of them in December 1999, according to Ramsey, who is chief investment officer for Leuthold Group.”

The so-called “stay at home stocks”, and many high-growth stocks have been dropping like a rock. High flying names like ROKU, DOCU, TDOC and many others too many to mention, are down as much as 80% from their February highs.

Will Mega-Cap stocks outperform in 2022, or will a different strategy be needed?

While we do not know what will happen in 2022, it is interesting to make some observations. 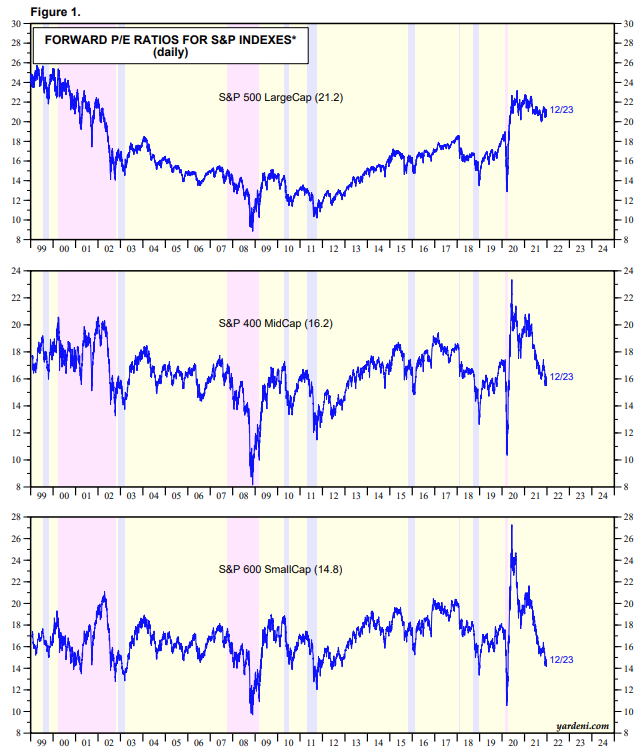 The above charts come from Yardeni research and offer some fascinating incite insofar as the forward multiple of US indexes.

While we do not know what will happen in 2022, it is interesting to make some observations.

While Index investing (AKA passive ETF investing) has been the main investment theme for several years, if you buy in an index fund today, you are paying the highest forward multiple on record, except for the 2000 dot com bubble period. On the other hand, small caps are the cheapest on record, with the exception of the 2008 financial crisis.

This does not mean that mega cap stocks will not rise in 2022, but it does mean that buying smaller companies might offer better returns. The same can be said for emerging markets as well.

The S&P 500 finished for 2021 up 27%. This is the 3rd year of double-digit gains, the longest annual hot streak since 1999. This is a very difficult streak to beat even in the best of times. In addition, the Fed is officially a headwind for markets, and it is unknown if the dollar will strengthen in 2022 which might act as an additional headwind. On top of this COVID is still with us, and the major US indexes are the richest they have been in many years.

Yes, US markets could still rise in 2022, but it will not be easy, and everything must be smooth sailing, including the Fed not overdoing it by tightening too much.

On the plus side breath indicators in the US are starting from a low point, with small and mid-caps being a good value, which might indicate there is money to be made if the market does not repeat the extreme concentration into mega-caps of the past several years. In addition, emerging markets especially China might also be a good investment choice in 2022.