Corn hits a decade high on supply and weather concerns The price of the Corn futures on the Chicago Board of Trade climbed to as high as $8,14 per bushel for the first time since September 2012 on Thursday morning, as the Russian invasion of Ukraine threatens global supplies at a time an unfavourable weather pressures crops in Brazil and slows the corn planting in the U.S. Midwest’s grain fields. 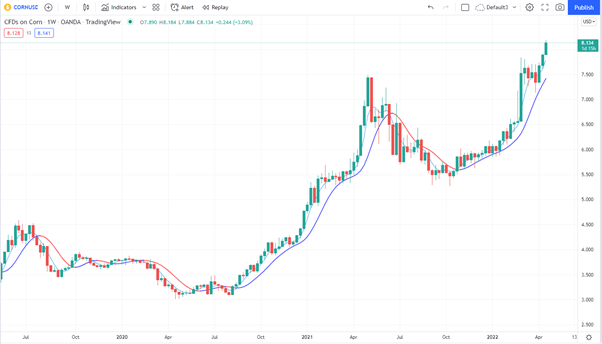 Corn is the third-largest plant-based food source in the world, and it is grown extensively as food for both humans (mainly in Latin America) and livestock (for pork and chickens), as a biofuel, and as a raw material in the food industry.

Investors worry that a prolonged Ukraine-Russia conflict and strengthen sanctions against the Russian state and its grain export firms and seaports will continue to disrupt corn exports from the Black Sea region, a key global grain supplier.

Both Ukraine and Russia are some of the world’s top exporters of corn and other grains such as wheat, barley, maize, and sunflower seeds, flows of which are largely blocked on silos or ports, accounting the 30% of global exports, pushing up grain and food prices around the world.

Before Russia’s invasion, Ukraine’s corn would have made its way to Black Sea ports like Odesa, Mariupol, and Mykolaiv by rail and loaded on to ships bound for North Africa, Asia, and Europe. But with the ports shuttered, small amounts of corn are rolling their way westward by rail through Romania and Poland before being shipped out, boosting the price of corn around the world.

According to the UN-United Nations’ World Food Programme, Ukraine has insufficient grain storage capacity even for its reduced 2022 grain harvest since the country struggles to export existing stocks during the invasion by Russia.

UN estimates that 20% of planted areas in Ukraine will not be harvested in July, an estimated of 15 million tonnes of grains will not have space in silos around the country and the spring planting area will be about a 1/3 smaller than usual.

Agricultural analysts are concerned that since Ukraine’s seaports of Mariupol and Odesa have been blocked by Russian invaders, Ukrainian farmers may not be able to export their existing grain stocks, losing the chance to generate the necessary cash to buy grain seeds and fertilizers for the next planting season.

Without revenues from the sales of the existing grain stocks, and the lack of financing from Ukrainian banks and the government, farmers may not be able to afford harvesting costs, let alone plant the next year’s crop.

Bad weather in Brazil and U.S:

The weather forecasts usually give price volatility in many agricultural commodities, with no exception the Corn, with investors concerning whether the increasing dryness in Brazil could threaten the Safrihna corn harvest.

Corn prices got a boost in recent days after a weather forecast for the second half of April in Brazil's central area, where some of the country's largest grain-producing states are located, might limit yields for the 2021/22 second corn crop, while then first crop was affected by the lack of rainfall.

On the U.S. front, cool and wet weather has troubled early fieldwork in the U.S. Midwest, with the U.S. Department of Agriculture reporting that the corn planting was 4% complete as of Sunday, below the five-year average of 6%, while a water shortfall on the large grain fields could compromise the yields of the future crop, at a time the world has been experiencing a supply grain deficit from Ukraine and Russia.