Russia’s invasion of Ukraine on February 24 cut off most of the food shipments from Ukraine and halted Russia’s food distribution from its Black Sea ports due to financial sanctions, driving the prices of the agricultural commodities to their highest since 2008.

The war has driven the prices of main vegetable, grain, and meat products such as wheat, corn, sunflower oil, soybean, pork, chicken, and beef to multiyear highs on growing concerns for a prolonged period of disruptions on the food supply chains from both countries.

With Russia and Ukraine accounting for 30% of global grain exports, the world is facing one of the worst disruptions to wheat and corn supplies since the first world war, which will hurt consumers around the world.

Bread, pitas, spaghetti, tortillas, noodles, and cereals are the main source of calories for billions of people around the world, and surging prices could be an explosive issue for the governments.

Ukraine considers the breadbasket of Europe and one of the largest producers of poultry, eggs, meat, and vegetables, with most of the production volumes exporting to the growing populations of the Middle East, North Africa, and East Asia.

The weather in the southern regions of the country is suitable for both winter and spring crops, having cold and wetter winters and drier and sunny summers.

2/3 of the country’s total land area is classified as agricultural land, with the central and the southeast areas being the key production zones for grains and vegetables since 1,000 BC.

Ukraine is the fourth-largest single-nation producer of corn, triggering a rally on the price up to 50% since October 2021, to near $7,50/bushel. Corn is used primarily for poultry and animal feed exported mainly to Russia and Belarus and is typically planted in April-May and harvested during September-November. 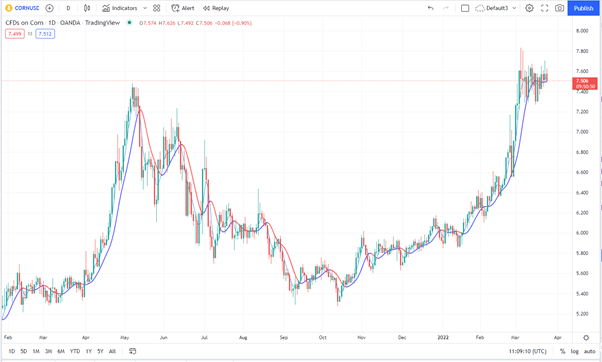 The country is also the world’s largest exporter of sunflower oil, accounting for 70% of total global demand. The sunflower oil trade is very lucrative for the farmers since it has very high demand around the world from restaurants to households as a cheap and efficient cooking oil.

Grain traders worry if Ukrainian farmers could find it difficult to harvest and ship their winter wheat crops later this summer since most of the exporting harbours in the Black Sea region such as Mariupol and Odesa are under attack from Russian troops.

On top of that, commodities traders are also wondering if Russian crops can be exported when most of Russia’s banking system is under sanction by Western governments, and ports in the Black Sea limited operations.

Ukrainian and Russian farmers usually plant winter wheat-which is 95% of the production- in the fall and harvest it during July and August of the following year, followed by the plant of the spring wheat and barley typically in April and harvested in August.

The price of Wheat gained more than 40% to as high as $13,50/bushel since President Putin ordered to invade Ukraine, as Russia is the larger wheat exporter in the world, and Ukraine the fifth.