Euro falls to $1,07 on weaker economic outlook and soaring dollar Following the strengthening of the US dollar against the Euro, the EUR/USD pair continues to fall towards a two-year low of $1,07, supported by the aggressively hawkish stance of the Federal Reserve, soaring US bond yields, safe-haven demand, and robust US economic growth at a time when global growth is slowing. 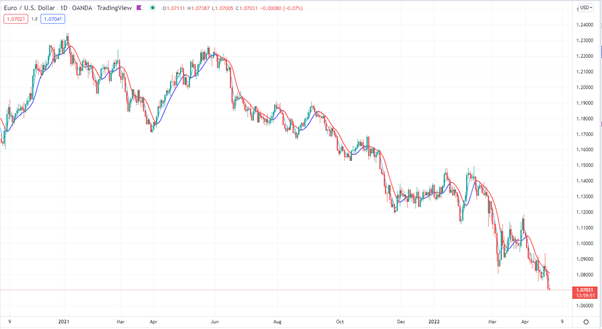 The risk-sensitive Euro is showing signs of weakening because of the Ukraine conflict, the mounting dangers of stagnation and stagflation in the Eurozone, and the ECB's dovish posture.

Amid weaker Euro dynamics, investors turned bearish on the EUR/USD pair, while the bullish macroeconomics of the US economy, the hawkish Federal Reserve, geopolitical concerns, and monetary policy divergence between the Federal Reserve and the European Central Bank continue to point to a higher dollar.

As numerous policymakers have set a more hawkish tone, the Federal Reserve is expected to continue to roll out rate hikes at upcoming meetings in its quest to get a handle on soaring inflation, supporting the rally in the 10-year U.S. Treasury yields towards the 3% level last week.

As a result, the EUR/USD remains vulnerable to downside threats, with Covid-led 2020 lows of $1,063 being eyed, particularly considering the Federal Reserve's potential for more aggressive policy tightening.

Euro fell to a two-year low of 1,07 to the dollar on Tuesday morning, as the Ukraine war, the energy crisis, and the dovish European Central Bank all threatened the Eurozone's economic prospects.

The European Central Bank is set to lower its growth forecast for the Eurozone further, citing fears about the effect from Russia's invasion of Ukraine, while major European equity indices are losing ground.

Since the sanctions on Russian raw materials mostly hurt the Eurozone's economic activities rather than other economies across the world, the Euro remains stuck in the developments of the Russia-Ukraine war.

Because European manufacturing and construction industries rely substantially on Russian commodities imports, any indication of escalation would have a negative impact on the euro, worsening the outlook for the Eurozone economy and raising fears of stagnation and stagflation.

Since Q4, 2021, when Russia began increasing its troops on Ukraine's borders, the Eurozone has been grappling with rising oil and natural gas prices, record-high electricity costs, and soaring industrial metal prices, posing a significant threat to the continent's commodities-dependent economies and the much-needed euro.