The Hungarian forint (HUF) has been on a downtrend path relative to the Euro since the start of 2022, with the rate of depreciation increasing sharply following the Russian invasion of Ukraine on February 24, to growing concerns over the impact of the war on the Hungarian economic recovery after the Covid pandemic, the surging inflationary pressure, and the new discipline procedure from EU to Hungary on democratic rights. 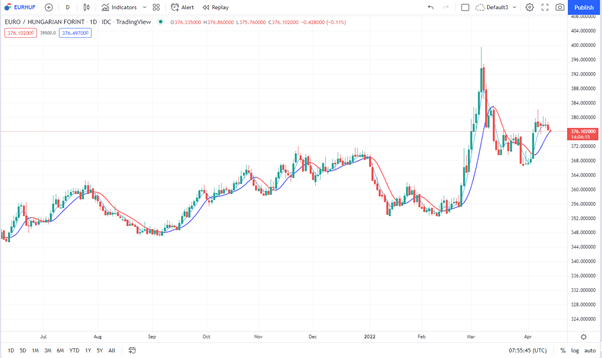 The Forint nosedived against the Euro over the following days of the Ukraine invasion, hitting an all-time low of HUF 400 per EUR on March 07, before retreating towards the 360-370 price range at the end of the month after the rate hike by 1% to 4,40% from the Hungarian National Bank.

The negative dynamics around the Ukraine invasion coupled with the soaring energy and commodities prices driven by Russian sanctions have hit hard the neighbour economies of Central Europe, triggering a sell-off and price volatility on the associated currencies, including the Hungarian forint.

The first negative indication came from the manufacturing sector, with the Hungarian industrial output rising by only 4,5% in a year-on-year terms in February, which was much lower than January’s 7,1% increase, deteriorating from the supply chain disruptions, and the higher energy costs.

The Hungarian inflation rate jumped to 8,5% in March from February’s 8,3%, and from 7,9% in January 2022, posting the highest since 2007, mainly on a sharp increase in the prices of energy, food, and consumer durables such as homes, cars, household appliances, furniture, and others.

Prime Minister Viktor Orban has pledged to find a way to maintain the anti-inflationary measures (energy and food price caps) introduced by the government which are ending in May.

Hungarian forint trades just 10% below the all-time high of HUF 400 to Euro, with investors assessing pledges for further rate hikes by Hungarian National Bank (MNB) to counter a surge in inflation across the country.

The Hungarian forint weakened at the beginning of April as uncertainty grew over Hungary's access to billions of euros of EU funds.

The bloc started a new disciplinary procedure against Hungary, in a step that could lead to freezing funding for Prime Minister Viktor Orban for undercutting liberal democratic rights since he came in power in 2010.

The European Commission has long criticized the re-elected PM Orban for restricting the freedom of media, academics, migrants, and gay people, accusing him of corruption, and for using EU funds to enrich his partners.

The Hungarian economy and by extension HUF are highly sensitive to the unstable and unprecedented geopolitical developments, the record high energy, industrial metals, and food prices, and especially vulnerable to the economic consequences of the ongoing military conflict in neighbour Ukraine and the inflationary pressure driven from the associated sanctions on Russia from the western countries.

On top of that, the soaring inflation rate deteriorates the purchasing power of the Hungarian citizens, adding risks to the economic growth of the country at a time the Central Bank has already started pulling liquidity off the market and proceeding with the first-rate hikes to curb inflation.

Finally, the EU’s announcement against PM Orban and the uncertainty over the billions of euros of bloc’s funds would be a negative catalyst for HUF in the near term, since forex traders hate political instability, with risks skewed to the downside against major currencies such as Euro and the U.S. dollar.