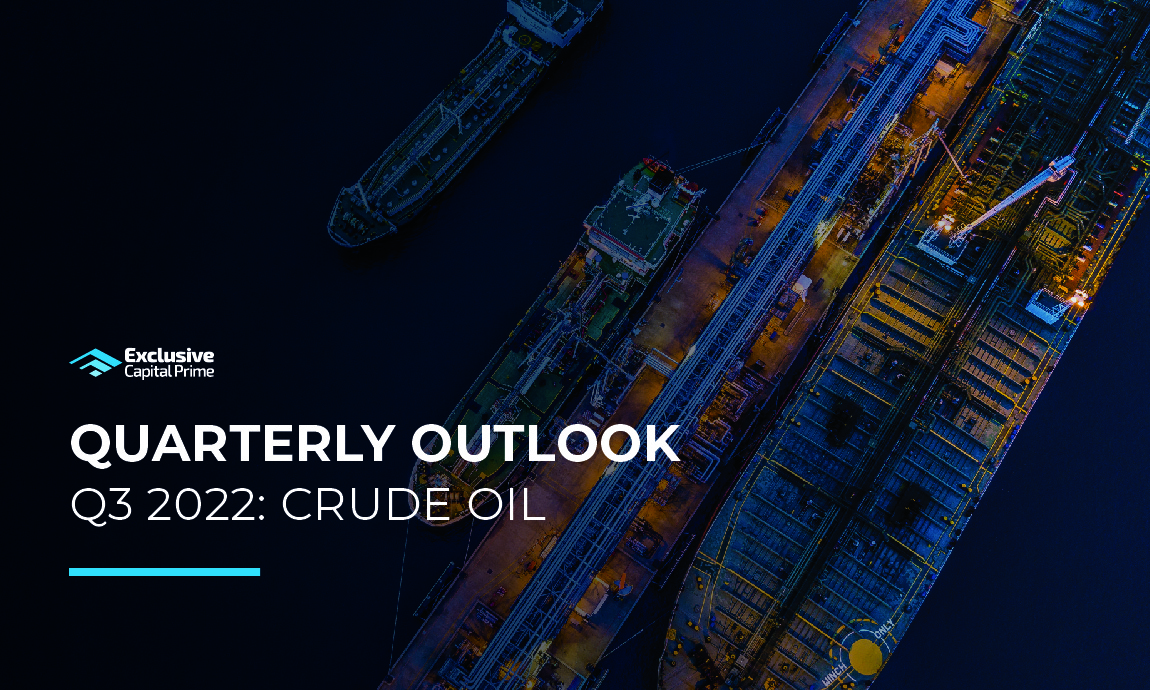 We remain bullish on crude oil prices as the third quarter of 2022 begins in the anticipation that ongoing underinvestment conditions in the global petroleum industry, the increase in demand for gasoline and jet fuels ahead of the start of the summer vacation season, the record-low spare capacity, the Western oil embargo on Russian oil, and the tight supplies will maintain the upward trend momentum on the crude oil and refined products, despite the global economic uncertainties and the recession worries.

Base scenario: We expect the Brent and WTI crude oil prices to be averaging at the $110/b key level throughout Q3 and trading into a range between $100/b-$120/b.

However, any briefly pullback of Brent and WTI oil prices below $100/b or even $90/b levels could be a buying opportunity given the market tightness, the underinvestment thesis, the solid fuel demand, and the ongoing geopolitical risks.

We are delighted to announce that our Q2, 2022 average price projection of $100-$110/b range for both Brent and WTI crude oil contracts, which was anticipated back in March 2022 (when the oil prices were ranging between $90/b-$100/b) was realized. The Western sanctions on Russian oil and gas had a significant impact on the petroleum products, which further tightened the global supply.

Here is the link for the Crude Oil Outlook Q2, 2022: https://exclusivecapital.com/research/quarterly-outlook/crude-oil-outlook-for-q2-2022/

Our base-case scenario for oil prices to average $110/b for Q3, 2022 is based on the supposition that worries about a tight global supply, underinvestment in the oil and gas sector, a lack of spare capacity, potential supply disruptions due to political unrest, sanctions on Russian energy, and potential damage from hurricanes to oil and gas facilities in the Gulf of Mexico will outweigh worries that demand for petroleum products may slow in the coming months.

Key market catalysts that will boost oil prices in Q3:

We think that the loss of roughly 3 million bpd of refining capacity over the past few years has been the main issue currently facing the energy market, not the low crude oil production or the conflict in Ukraine.

Due to the greater operational expenses, environmental constrains, and the decreased demand for refined goods during the Covid era, many energy corporations or refiners made the decision to close or reduce some of their outdated and unprofitable facilities during the pandemic period.

Hence, some refiners closed some of their facilities in expectation of lower refined demand in the next 10-20 years due to the green transition and the dominance of the environmental-friendly hybrid or electric vehicles, while some others have downsized refining operations to cut carbon dioxide (CO2) emissions, as part of its ambition to be a net-zero emissions business by 2050 or sooner.

On top of that, the global market had also missed the refined capacity from Russia and Ukraine due to the war and the economic sanctions, sending gasoline and diesel stockpiles to multi-year lows.

The underinvestment saga in the petroleum industry in the past 5 years has been seen as one of the main reasons for the current imbalance between supply and demand in the global markets.

Even though Brent oil price briefly climbed to $140/b and WTI to $130/b at the beginning of March 2022, we haven’t seen a relative boost in the oil production from major OPEC+ producers or the U.S. shale drillers because of some major reasons such as the widespread shortages of equipment, workforce, and raw materials, at a time the supply chains delays had also increased the production costs of the wells.

The U.S. oil production remains about a million barrels daily below the record of nearly 13 million bpd the country produced in early 2020, the OPEC+ group struggles to meet its production targets due to political unrest and lack of spare capacity, at a time Russian oil output is slightly falling due to Western sanctions.

The Shale oil and gas industry has been facing certain constraints in boosting production owing to the combination of the continued attacks from U.S. President Joe Biden, the regulatory uncertainties, the huge service costs, and the supply chain issues which don’t encourage companies to invest in the exploration of new oilfields and increase their drilling activity.

We expect the crude oil prices to maintain their upward price momentum in Q3 as we believe that any weak signs of fuel demand amid recession fears would be limited on the view that global supply tightness will continue since there is limited room for the major OPEC producers such as Saudi Arabia, and the United Arab Emirates to be able to raise output significantly to meet recovering demand, plus, to make up for lost Russian supply and also to cover the below-the-agreed output from other OPEC member nations.

Although Saudi Arabia and UAE are the only producers across the OPEC+ group with some little spare capacity of only 100k-150k bpd respectively, we believe that they might not want to sacrifice this small capacity to protect the market from any unexpected supply disruptions from the ongoing political unrest in Nigeria, Ecuador, and Libya or a major hurricane in the Gulf of Mexico ahead of the kick-off of the hurricane season in the U.S.

Sanctions on Russian oil and gas:

Oil prices will continue getting support from any attempt from the Western countries to pose additional sanctions on Russian oil and gas in response for the invasion of Ukraine.

The leaders of the Group of Seven rich nations, including the U.S, France, Germany, UK, Italy, Japan, and Canada promised to tighten the squeeze on Russia's petroleum revenues with new sanctions which could limit Moscow's ability to fund its invasion of Ukraine, that include a plan to cap the price of Russian oil and gas.

Yet, this event could benefit oil prices since crude oil could be one of the substitutes (the other is Coal) for natural gas in Europe, which struggles with significantly reduced Russian supply via the Nord Stream pipeline and sanctions.

We have signs of a faster-than-expected demand recovery for petroleum products in key fuel consumer regions such as North America and Asia despite the current economic and pandemic challenges.

The fuel demand has boosted by the massive infrastructure packages and economic stimulus, coupled with robust demand for gasoline and jet fuels moving into the summer driving and traveling season in the Northern Hemisphere.

The demand for crude oil and refined products has almost recovered to pre-Covid levels following the rapid recovery of industrial and economic activities in emerging countries in Asia, especially China and India, driven by the removal of the Covid-led mobility restrictions and the restart of the global trade.

Concerns that will cap oil price gains in Q3:

Energy investors will pivot away from the inflation saga to fears over a global recession in the third quarter that could suppress economic activity and reduce petroleum demand.

We expect that the aggressive monetary tightening (rate hikes) by the major central banks around the world to curb the 40-year record high inflation would lead to a slowdown in the global economic growth (soft landing) or even worst, to a recession (hard landing) during the next quarter, which in turn could harm demand for petroleum products and cap oil price gains above $120/b mark.

Furthermore, a stronger U.S. dollar might also cap price gains of the oil prices, since the dollar-denominated crude oil contracts will become more expensive for buyers using other currencies.

However, we believe that the supply tightness, the lower OPEC output, the unrest in Libya, and the energy sanctions on Russia should put a floor under the price slide and prevent Brent oil prices to fall far below $100/b in case the recession fears bring a general market sell-off amid a risk aversion sentiment.