The Russian invasion of Ukraine weighs on the global financial markets 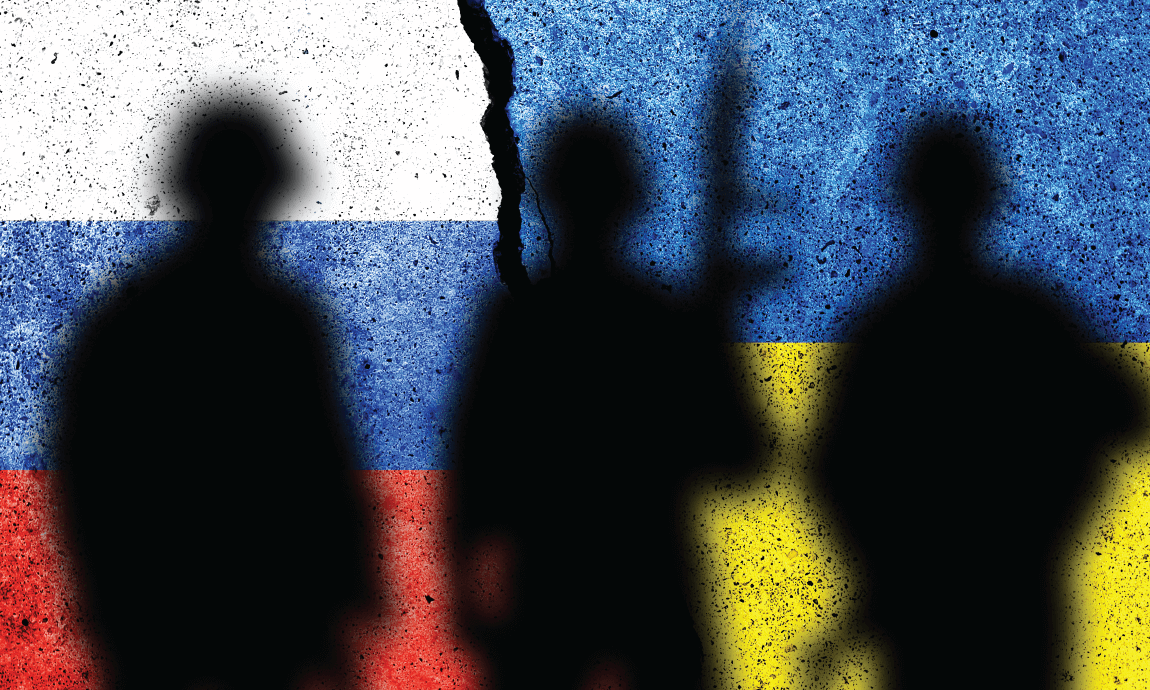 Russia’s “full-scale” invasion of Ukraine weighs on the global financial markets, with significant losses on the equity markets around the world, sell-off in cryptocurrencies, while on the other side, commodities and safe-havens rallying as investors seek safety during the turbulence moments.

President Putin announced a "special military operation" to demilitarize Ukraine on Thursday morning, with his forces attacking significant infrastructure and military targets in and around the cities of Kyiv, Odessa, Kharkov, and Mariupol. 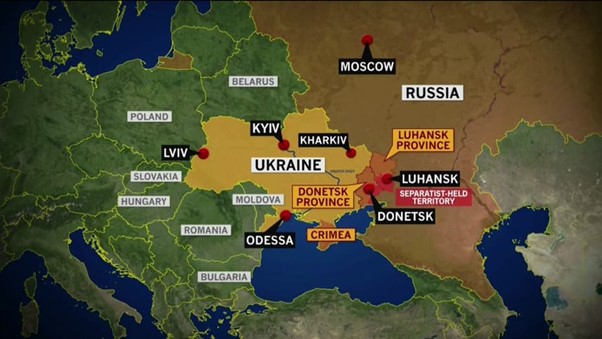 Global equities hit hard during Thursday morning, with the MOEX-Moscow Stock Exchange losing to as much as 45% before recovering slightly higher, while the Russian Ruble crashed to new record lows against the dollar of 90 level.

US equity futures are rapidly extending losses from the day session, with Dow Jones losing more than 800 points or down 2,5% since Wednesday’s close.

In Europe, the pan-European Stoxx 600 dropped nearly 3.5%, to its lowest point of the year, with the German DAX index losing more than 5% since Germany has significant trade and economic exposure to Russia and Ukraine.

Fears over the escalating tensions in Ukraine have also removed risk appetite from Asia-Pacific markets as well, with Japan’s Nikkei 225 index falling almost 2% to a 15-month low, while markets in China, Australia, and South Korea dropped more than 3%.

The VIX-CBOE Volatility index, also known as Wall Street's fear gauge, climbed to near the 38 mark, its highest since January 24, 2022.

Concerns over the escalating tensions in Russia and Ukraine weigh on risk sentiment, with investors looking for protection on the traditional safety assets such as Gold and other precious metals, bonds, and Japanese Yen, U.S. dollar, and Swiss Franc.

Gold and Silver, traditionally haven assets in times of uncertainty, rose 3% to $1,970/oz and $25,30/oz respectively, while Palladium gained more than 7% to $2,650/oz since Russia is exporting 50% of the metal necessary for the automobile industry.

The DXY index which tracks the greenback against a basket of its peers, climbed to 97,20 level, its highest since the end of January, with the Japanese Yen and Swiss Franc advancing across the board.

Risk-sensitive currencies plunged, with Euro breaking below $1,12, Turkish lira falling to $14,50, Pound Sterling declining below $1,34 and Australian dollar falling to near $0,715.

Bonds are also bid with the U.S 10-year yields down around 12bps from yesterday's highs to 1,85% as investors now believe that Federal Reserve will hike rates at less magnitude than previews expected.

The international crude oil benchmark Brent surged to as high as $106/b, while the U.S.-based WTI crude hits $100/b for the first time since 2014 as Russia’s dramatic escalation of the Ukraine crisis sparked fears of supply disruptions from the oil-rich area. 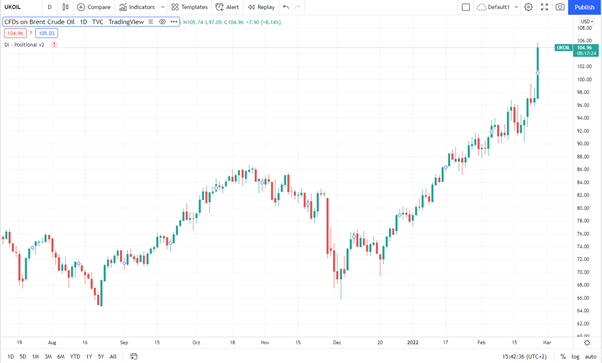 Russia is a key supplier of oil & gas to the world, being the world’s second-largest producer of natural gas and the third-largest oil-producing nation, just below the U.S. and Saudi Arabia. European natural gas Dutch TTF prices surged up to 41% to €125/MWh (nearly $40/mmbtu), the highest level in 2 months, and the U.S-based Henry Hub gas prices are spiking back to near $5 or up 6% after Russian forces attacked targets across Ukraine.

Russia has been a commodity superstore with huge volumes of exports in cereals and industrial metals, while Ukraine has been a world-class exporter of Wheat.

For now, the biggest physical disruption to Russian-Ukrainian commodities flow appears to be on grains (wheat would be most affected), since Russia blocked the grain-export ports of Mariupol and Odessa this morning.

In the industrial metal sector, Aluminum prices posted a fresh record high of $3,350/lb, and Copper climbed above $4,52/lb as Russia export major volumes of both metals around the world.