Global equities are posting steep losses on Thursday morning, the final trading day of the month and the first half of the year, as investors worry over the global economy's health and the aggressive rate hikes.

A risk aversion sentiment weighs on the global financial markets on the growing concerns that the aggressive monetary tightening by central banks to curb the 40-year high inflation combined with the ongoing Ukraine war and energy crisis will cause a severe global economic slowdown or a recession.

Investors have turned away recently from risky assets such as stocks, cryptocurrencies, and growth-sensitive currencies to assets that offer security in periods of uncertainty such as gold, bonds, U.S dollar, Swiss Franc, and some inflation-hedged commodities such as crude oil.

The investment sentiment deteriorated today after the Fed’s chair Powell’s speech at the ECB forum, warning that a broader economic slowdown could be a "likely" outcome of the aggressive monetary policy actions aimed at curbing the soaring prices.

Hence, the Federal Reserve Bank of Cleveland President Loretta Mester said yesterday that she will advocate for a 75-basis point hike to interest rates at the central bank’s July meeting if economic conditions remain the same by then.

Following the gloomy market sentiment and the recent selloffs, the major equity indices in the U.S., Asia, and Europe are on course to post significant losses in Q2, 2022, which ends today, Thursday, June 30. 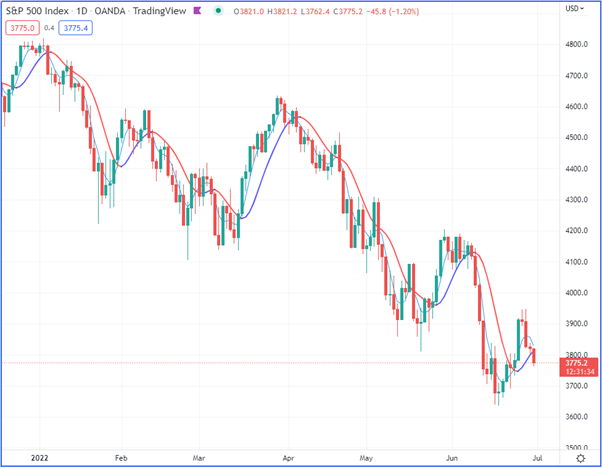 The U.S. stock indices are preparing to close out their worst first half of the year since 1970, with the S&P 500 down about 20% in 2022 so far, the industrial Dow Jones to be on track for its worst three-month period since the first quarter of 2020 when Covid lockdowns sent stocks tumbling.

Meanwhile, the tech-heavy Nasdaq Composite is ready to post the worst quarter since 2008, down 20% over the last three months since the recession fears, and the higher rates are hitting hard the tech names.

Looking at the European markets, the German DAX is losing more than 2% on Thursday morning and it’s on course to end June with more than 10% losses as we have already seen evidence of a slowdown in the German retail sales which dropped 3,6% on the year in May, while the French CAC and UK’s FTSE 100 are currently posting monthly losses of 8% and 6% respectively.

A similar bearish picture could be seen in Asian markets, with S. Korea’s Kospi losing almost 2% today, while Japan’s Nikkei 225 index settled down by 1,5% on the last trading day of the month after Japan’s industrial production plunged 7,2% in May which could have been affected by lockdowns in China.