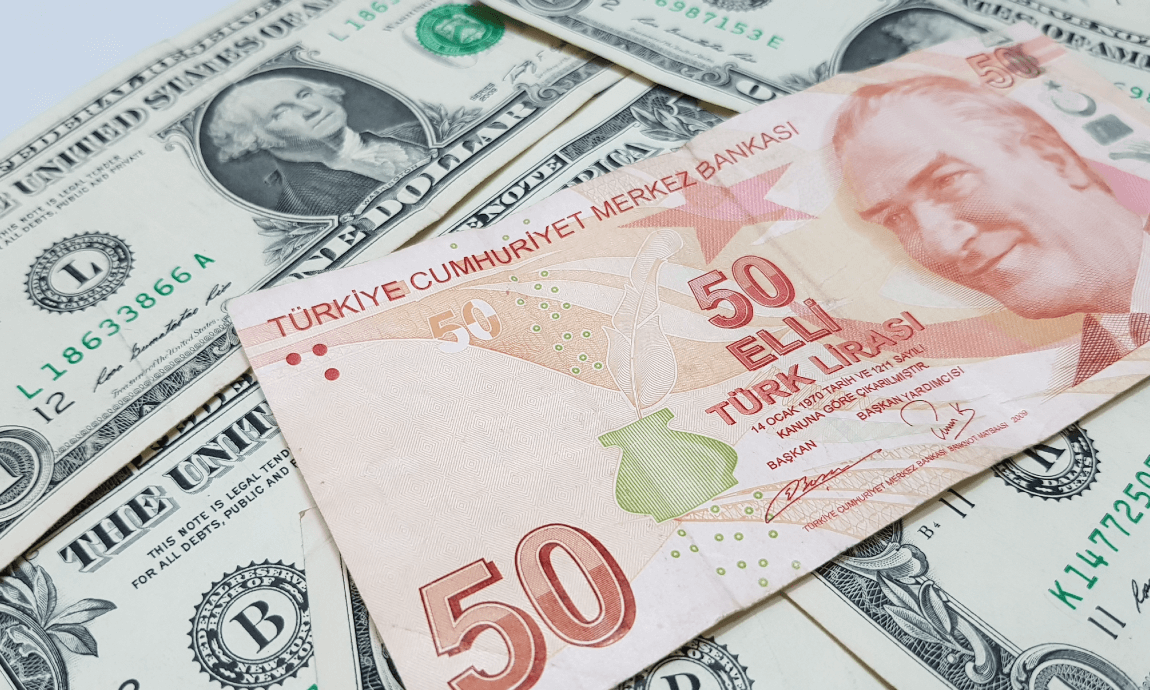 The Turkish lira weakened to a record low of 8.32 against the US dollar and 9.77 against the Euro on Thursday morning, heading further into uncharted territories. The Lira lost more than 27% of its value in 2020 and almost 90% since the financial crisis of 2008 against major currencies and shows little sign of stabilising despite the efforts by its Central Bank to stop the fall.

The sell-off in Turkey’s currency was driven by a cocktail of worries such as the worsened inflation outlook, the unwillingness of Central Bank and President Erdogan to increase the key policy rates above inflation rates, the badly depleted FX reserves, poor macroeconomic fundamentals, ongoing geopolitical tensions in the Caucasus and the Eastern Mediterranean, deterioration of Turkey’s relations with Western allies and the prospect of economic sanctions under a possible Joe Biden presidency.

The USD/TRY broke above the symbolic level of 8 for the first time ever, adding additional inflation pressure, just after Turkey's Central Bank kept unchanged its policy rate at 10.25% last week, saying significant tightening in financial conditions had already been achieved after steps to contain inflation risks.

The Turkish Central Bank has also raised its mid-point inflation forecast for end-2020 to 12.1% from 8.9% in its previous inflation report in September, while the bank forecasts that inflation will fall to 9.4% at the end of 2021, compared with a forecast of 6.2%.

The decision of the Central Bank to leave the key rate at 10.25% has disappointed investors who had expected a big interest rate hike of 175 basis points to support the falling lira. Investors were expecting more monetary tightening after the surprised 200 basis points rate hike in September (first rate hike after 2018) to control Turkey’s chronically high inflation.

President Erdogan had long called for interest rates to be lowered, describing them as the "mother and father of all evil”, raising the concerns about the Central Bank's independence and fears over presidential control on monetary and economic policies. Erdogan fired the previous central bank chief Murat Cetinkaya in 2019, who resisted the president's growth-at-all-costs policy and low-interest rates.

The current key policy rate of 10.25% remains below the annual consumer price inflation, which stood at 11.75% in September, leaving real rates negative for the lira. This development forces Turkey’s lira depositors to sell their currency for the more stable US dollar, Euro, or Gold, adding more pressure to the lira.

Turkish retail and government banks have spent more than $135 billion over the past 2 years to support the falling lira in the open market, worsening the country’s foreign currency reserves. Moody’s Analytics has warned that Turkey has almost depleted the buffers that would allow it to stave off a potential balance-of-payments crisis.

The investment sentiment about Turkey’s lira deteriorated after European Council President Charles Michel accused Turkey of resorting to provocations, unilateral actions in the Eastern Mediterranean, and Caucasus and insultations against European leaders.

Turkey has been accused of its role in the re-eruption of fighting in the disputed Caucasus region of Nagorno-Karabakh between Azerbaijan and Armenia. Furthermore, it has an ongoing dispute with Greece and Cyprus over maritime rights and ownership of natural resources while it has supplied weapons and soldiers to support its proxy groups into Libyan and Syrian civil wars.

The relation between Turkey and the USA has deteriorated after Turkey had started testing a Russian-made S-400 air defense system, while it also antagonizes the US in the Middle East and the Mediterranean Sea with its aggressive foreign policy. The Turkish lira slid further this week after President Erdogan challenged the United States to slap sanctions over his government’s decision to test the S-400 missiles.

Forex traders fear that a win for the Democratic candidate Joe Biden in the US presidential election of November 03, could increase the likelihood of economic sanctions against Turkey. Joe Biden has recently referred to President Erdogan as an autocrat and stated he was in favor of supporting political opponents to defeat him in elections.

Investors believe that a Biden administration would work with European allies to impose extra aggressive sanctions against Turkey into 2021. The last time the US imposed sanctions against Turkey was in 2018 when Turkey imprisoned U.S. pastor Andrew Brunson on terrorism charges, sparking a currency crisis for the lira that led to a deep recession in the Turkish economy.

Turkey's economy contracted nearly 10% in the second quarter of 2020 as it was significantly affected by the coronavirus pandemic and measures to combat it. The local retail market was hit hard from the lower consumption combined with the Lira’s depreciation and higher inflation rates. In addition, the lira sell-off comes as Turkey earns fewer dollars and euros due to a massive drop in tourism and slumping exports amid the virus pandemic.

Given the ongoing uncertainties around the economy, the pandemic, and geopolitical tensions, Fitch ratings expect the Turkish economy to remain volatile, forecasting the GDP to contract by 3.2% in 2020, but grow more than 5.0% in 2021.

Many rating houses have already started downgrading the outlook for the Turkish companies amid the depreciation of the Turkish lira, the fragile local economy, and the weak corporate revenues from the effects of the Covid-19 pandemic.

The downgrades reflect mainly the material foreign currency risk as most of the Turkish companies have large debts denominated in US dollars (loans) or Euros (Eurobonds), but their corporate revenues are in Turkish lira. The heightened FX exposure has weakened the credit metrics of the companies while some of them have already been facing difficulties to meet their debt obligations.