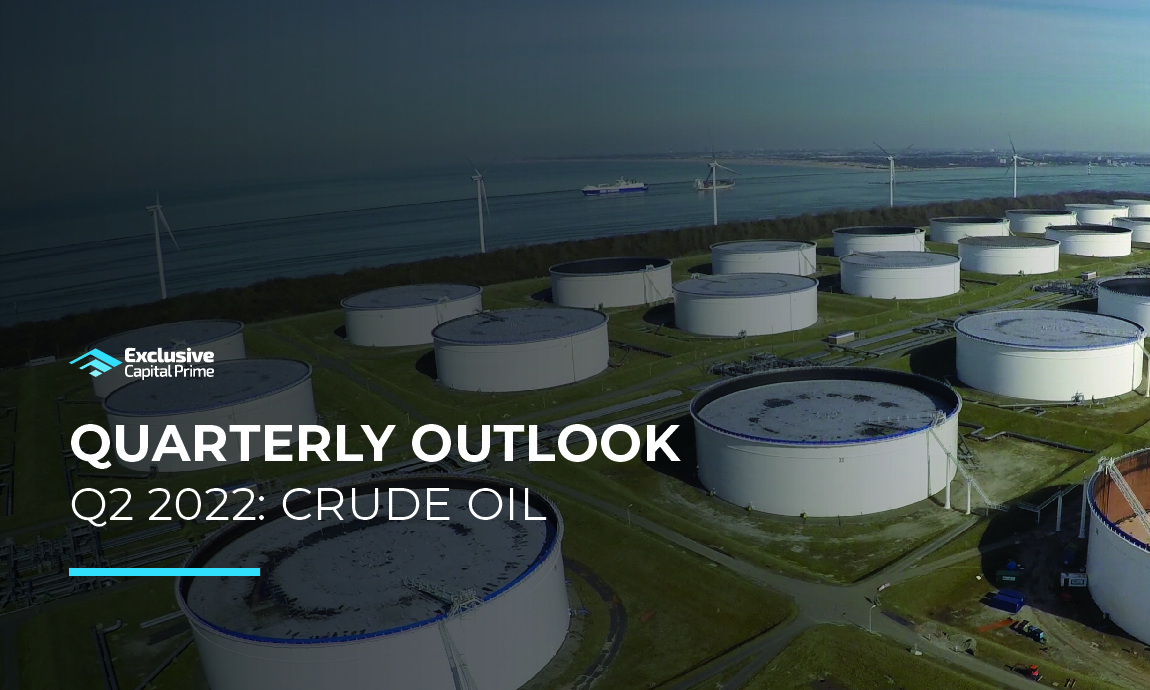 Q1, 2022 was an unprecedented period for the global financial markets since Russia’s invasion of Ukraine on February 24, and the subsequent economic sanctions against Russia and Belarus have caused a supply shock in the global economy, sending energy, industrial metals, and the food prices to multi-year highs in early March 2022, just as the world was recovering from its two-year Covid-19-led recession.

Ukraine war has shaken global energy markets since Russia supplies a significant amount of the world’s crude oil, gas condensates, natural gas, LNG, and coal, while Ukraine has been a major transit country for a series of critical Russian state-owned oil and gas pipelines that link the energy-rich Siberia to European energy markets.

Russia was the world’s third-largest energy producer after the U.S and Saudi Arabia, producing approx. 10 million bpd of crude oil and another 1 million bpd of gas condensate as per March 2022 data.

According to the Ministry of Energy, Russia exports roughly 5 million bpd of crude oil and around 3 million bpd of distillate fuels like diesel, gasoline, petrochemicals, kerosine, asphalt, and mazut to European and Asian customers via pipelines and oil tankers.

Investors experienced some historic price volatility on the crude oil contracts during the Q1, 2022, with both Brent and WTI posting extraordinary and wild $30 per barrel price swings in only a short time, since the market was trapped between the supply-led worries from the Ukraine war on the one hand, and on fears of a Covid-led demand downturn in China and SPR reserve releases from the other.

The international oil benchmark Brent and the U.S.-based WTI hit a 13-year high of $139/b and $130/b respectively on March 06, building an approx. $30/b “Ukraine war premium” on the prices at that period, as the energy investors were factoring the worst-case scenario by losing all Russian crude output of 11 million bpd amid western sanctions at a time OPEC+ alliance was hesitating to hike production more than the agreed 400k bpd per month, and the Iran-backed Yemen Houthi group was attacking oil facilities in Saudi Arabia with drones and cruise missiles.

Yet, both oil contracts retreated to near $100/b at the beginning of April following the demand-led concerns that the growing Covid situation in China that fresh China’s Covid lockdowns (in Shanghai city) could impact fuel demand growth, coupled with the coordinated SPR reserve release from major economies such as U.S, UK, and IEA-International Energy Agent.

The current tightening supply outlook together with the robust demand growth after the pandemic, the growing fears over possible supplies disruptions on Russian oil at a time that global inventories are very low, while some OPEC+ producers cannot increase output, will continue supporting our bullish outlook for both Brent and WTI oil prices for staying above $100/b for the second quarter of the year.

Our base-case scenario sees Brent and WTI crude oil contracts trading between $100-110/b and $95-105/b respectively for the second quarter of the year based on the current bullish fundamentals, geopolitical risks, and the significant supply/demand imbalance.

1. Underinvestment in the oil market: Global crude oil market has some “structural or fundamental issues” that could continue supporting oil prices staying above the $100/b level in the second quarter of the year, such as the growing concerns over supply shortfalls due to the long-term underinvestment in the petroleum industry.

2. A temporary relief from SPR release: We believe that the recent decision of the IEA member nations-including the U.S and the UK- for a coordinated release of up to 1 million bpd (240 million barrels) of oil from their SPR- Strategic Petroleum Reserves for over a period of six months starting from May, could only provide temporary relief on the oil market and to balance off the supply shortfalls in 2022, but it might not be a long term solution since it would not really resolve the structural supply deficit caused by a prolonged underinvesting period in the energy market.

3. Lack of U.S. Shale output growth: Many U.S. Shale oil and gas producers may be reluctant to ramp up output and invest in new drillings despite the multi-year high oil prices, preferring to keep the profits and return them to the shareholders through dividends and buybacks.

4. Unsold Russian oil: The main short-term bullish price catalyst remains the declining flows of Russian oil to the global markets due to the Western sanctions and self-sanctions, with the unsold oil estimated at around 2-3 million barrels per day.

5. Russian oil sanctions: Sanction worries will force many global state-owned refiners to avoid taking the risk of dealing with Russian oil despite the steep discounts for Urals and Sokol grades, sometimes to as much as 35% or $35/b to the international oil benchmark Brent, while banks and insurance companies will be scaling down financing Russian oil-related deals. Urals and Sokol blend crude grades are the main oil blends that Russia exports mainly to European and Asian customers.

6. Self-sanctioning: Private refiners and commodity traders will continue self-sanctioning themselves for not rushing to buy heavily discounted Russian oil on the spot market, avoiding being singled out as buyers of its oil. U.S. and UK banned Russian oil in March while the European Union slapped sanctions on top Russian suppliers Rosneft, Gazprom Neft, and Surgutneftegaz.

7. Russian oil pivots to Asia: With oil prices still being 80% higher than a year ago, we expect that buyers from China and India will continue buying more crude oil from Russia at deep discounts based on their oil import strategy.

8. Robust demand growth: Despite the higher crude oil prices and some temporary gasoline demand declines after China’s lockdowns, we believe that the demand for petroleum products could continue its recovering path above pre-pandemic levels, especially as we are heading to the demand-boost summer driving and traveling season, and as the while, a large percentage of the global population has been already fully vaccinated.

9. OPEC+ limited production: The Organization of the Petroleum Exporting Countries (OPEC) would be impossible to replace potential supply losses in case of sanction on Russian oil since its production levels remain below-approved targets at a time the OPEC+ alliance has already shown an unwillingness to hike oil output beyond the agreed 400k bpd per month.

10. Limited spare capacity: Spare capacity among key OPEC+ oil producers is very limited, and accounts only for 1-2 million barrels per day, which won’t be enough to replace the lost barrels from Russia.

11. Tight global inventories: The world lacks inventory buffers as the total petroleum inventories dropped to the lowest level since 2015, with crude oil, gasoline, and distillates holdings accounting for the most of declines, especially in the region of Europe.

12. The coal ban is bullish for oil: We believe that the recent embargo on Russian coal imports from the EU is a bullish event for crude oil since all three energy fuels, oil, gas, and coal are linked. For instance, in case of one of them becomes too expensive or undersupplied, then the demand from utility companies for the others increases, so does the price.

13. Stalled Iranian nuclear talks: Stalled indirect talks between Iran and the United States on reviving a 2015 agreement on Tehran's nuclear program have further delayed the potential for sanctions on Iranian oil to be lifted, keeping the global oil market tight.